Benjamin Kelm is an actor and author from Saarbrücken, Germany. He is currently living in New York City as he received a scholarship from the New York Conservatory for Dramatic Arts.

He completed his acting training in Germany (Saarbrücken) and in England (London).

He has already appeared in various theatrical and film projects in Germany, such as the kids series “Wissen macht Ah!” or the series “Unter Tannen” (new episodes will air in the spring of 2019). In the latest crime TV show “Tatort – Der Pakt” with Devid Striesow, he had a supporting role.

In 2017, he participated successfully at the “World Championships of Performing Arts” in Los Angeles and was awarded with six silver medals (highest jury rating) and an Industry Award. He also received a scholarship from the New York Conservatory for Dramatic Arts.

In addition to his activities as an actor, he also works as an author. In 2016, he published his first book “Nichts ist alltäglich” (Nothing is ordinary) and received the Saarland Author’s Prize (HomBuch Award) in fiction.

He is currently writing his first novel (working title “I never said that!”) which he would like to release later this year.

Visit his German page with photos, videos and CV. 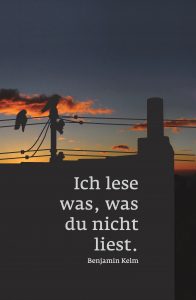